This article is published in the June 2018 issue.

The Computing Community Consortium (CCC) recently sponsored a workshop on “Robotic Materials” in Washington, DC. This workshop was the second in a series of interdisciplinary workshops aimed at transforming our notion of materials to become “robotic”, that is have the ability to sense and impact their environment. Participants were recruited from a diverse set of stakeholders including material and computer scientists, researchers in government labs, industry, government agencies, and policymakers.

There was broad agreement that computation will become an important part of future material systems. Computation will allow materials to analyze, change, store and communicate states in ways that are not possible using mechanical or chemical processes alone. Yet,  what “computation” is, is unclear to most material scientists, whereas computer scientists are largely unaware of recent advances in so-called active and smart materials. For example, there is agreement that a nervous system is a critical part of natural material systems such as an octopus arm, a cuttlefish skin or even a bone, but it is hard to see what is computed and communicated. Yet, there is agreement that everything that can be computed can also be achieved by smart arrangement of mechanical processes, an insight rooted in the concept of Turing universality of mechanical computers. Here, a dialog and formal understanding of what is physically possible, e.g. stimulus-responsive “smart materials”, and how an abstract treatment of these concepts allows for mathematical reduction might enable the creation of new materials with unprecedented functionality without requiring von Neumann architectures. This gap is currently shrinking, with Computer scientists embracing neural networks and material scientists actively researching novel substrates such as memristors and other neuromorphic computing devices. 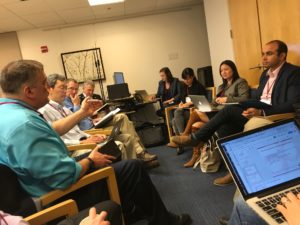 Both material and computer scientists are intrigued alike that biological material systems are exclusively made from cells, which is in contrast with engineered materials that are homogeneous or composites at best. Unlike conventional material systems, biological cells rely on digital information in the form of DNA that control their formation and enable their rapid evolution. It is conceivable that material engineering might reach similar sophistication, pioneered by subfields of computer science such as modular robotics, swarm robotics, social insects and amorphous computing. The latter has already begun to blend with the field of synthetic biology, creating inroads between computer scientists and chemists, and thereby material scientists.

Further pursuing these ideas will require an emphasis on interdisciplinary collaboration between chemists, engineers, and computer scientists, possibly elevating mankind to a new material age that is similarly disruptive as the leap from the stone to the plastic age. With the fast convergence of technologies that are already happening such a transition might not require an additional 300000 years, but merely a few decades.

See the workshop website for more information including the forthcoming workshop report.

Artificial Intelligence — The Revolution Hasn’t Happened Yet
Scroll to top
We use cookies to understand how you use our site and to improve your experience. By continuing to use our site, you accept our use of cookies.Accept Read More
Disclaimer
Privacy Overview