CRA participated once again in the Coalition for National Science Funding’s annual Science Exposition on Capitol Hill last week and it was a great success. The event, a science fair for Congress and staff, had 35 booths manned by researchers representing universities and scientific societies featuring some of the important research funded by the National Science Foundation. This year CRA was ably represented by Lydia Kavraki, a computer science professor from Rice University, whose research into using computational tools to solve problems in a range of areas such as biology was a hit with all those who stopped at the booth. 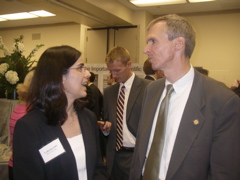 The exhibit drew a record crowd with 493 attendees, 11 of whom were members of Congress such as Rep. Dan Lipinski (IL) who stopped to talk to Dr. Kavraki about her work. There were also a number of NSF staff members and a large contingent of Congressional staff, particularly from the House Science and Technology Committee.

As weve stated before in this space, personal visits to members of Congress and their staff are vital to getting the message about the importance of computing research out. CRA holds or participates in Congressional visit days several times throughout the year and we are always looking for participants. If you are interested in coming to Washington to visit your Representative and Senators, please contact Melissa Norr at mnorr at cra.org.